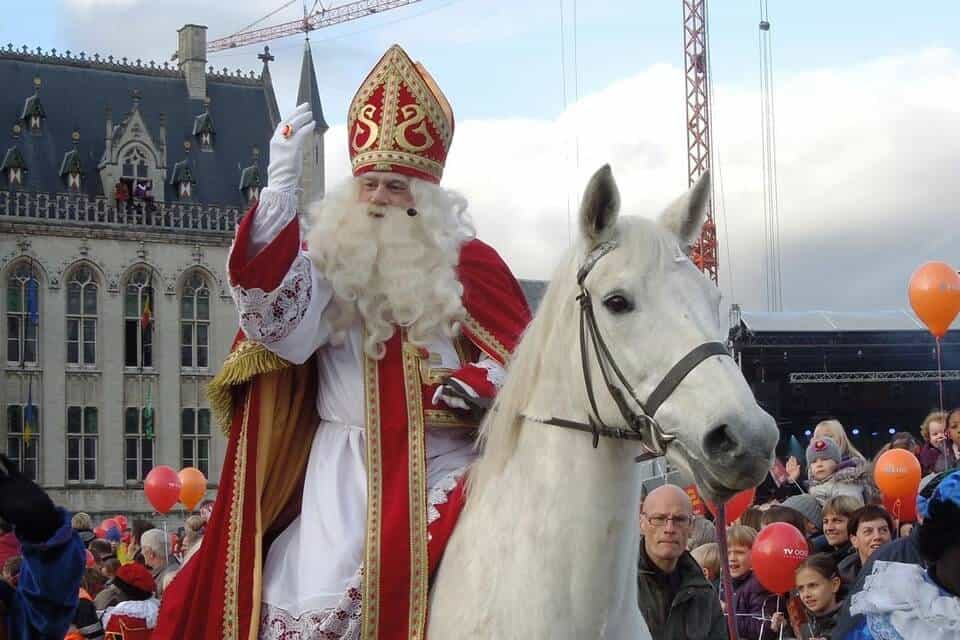 Almost half of Dutch people do not celebrate at Sinterklass events this year.  According to a Hart van Nederland survey, over 41 percent of people in the Netherlands plan to skip the festivities.

Participants in the survey quoted the controversy over Zwarte Piet (Black face) a character in the celebrations who wears blackface, as one of the main reasons for skipping Sinterklass celebrations.

The controversy made some celebrations completely avoid blackface, while others feature “Gray Piets” who wear  gray makeup.

The second big reason was the economic crisis as people stayed at home from these events.

But there are still some Dutch people who wish to celebrate the festival.  One in three wish to buy special sweets for the occasion.

The Dutch St. Nicholas holiday, the Netherlands conduct parades.  The saint (in Dutch, Sinterklass) arrives in town to give away candy and gifts.  But these parades have  increasingly polarized  parties and turned violent.

Who is Zwarte Piet?

In Dutch tradition, he has a helper named Zwarte Piet (Black Pete).  He usually appears as a blackface character with large gold earrings and exaggerated lips.

The character was popularized in a mid 19th century children’s story book which was written a Dutch man who was very interested in the Dutch Royal Family.

But Joke Hermes, a journalism professor in Holland University, says ‘one of whom bought a slave in a slave market in Cairo in the mid 19th century.  He also added, this slave might have helped Zwarte Piet.

Netherlands was involved in slave trade before it banished in 1863.  The country became prosperous by selling enslaved people to the United States or sending them to work in Dutch colonies.

Some nobles ‘gifted’ each other with some enslaved black children,  These were shown paintings in colorful, Moorish clothing like Zwarte Piet.

Activists like Esajas and Quinsy Gario started a project “Zwarte Piet is Racisme” (Black Pete is Racism) and forced some cities and schools to stop black face celebrations in a phased manner.

McDonald’s banned its employees from dressing as Piet and the Dutch Police announced that it won’t allow Piet’s clothing in celebrations.

As the movement has gained momentum and spread, many communities came forward to ban Black Piet in their celebrations.  On the other hand it often faced the criticism that it is running under white supremacist conspiracy theories.

Sinterklass and Santa Claus: What is the difference?

The key difference is both are different forms derived from Saint Nikolas.  Sinterklass is popular in Europe, mostly in the Netherlands while Santa Claus is popular worldwide.

They both work in the same sector, red clothing with a long white beard but what is the difference?

Sinterklass: December 5 is the gift distribution day, but Sint arrives in mid-November amidst great fanfare.  He spends a couple weeks parading around the city tantalizing children with candy.

Santa Claus:  Arrives on 24 December goes rooftop to rooftop and down the chimney to deliver presents.  Children usually find gifts and treats on the stockings hung on the chimney.

Sinterklass: Appears in religious iconography in a skinny Sint’s winter wardrobe.  He is mostly pairing his red, papal gown with a white bishop’s alb and a red mitre emblazoned with a cross over it.

Santa Claus: Santa Claus dresses for comfort rather than style in a red two-piece with white trim and thick black belt.  Appears with a load of gifts alongwith perpetually carrying his obese body.

Sinterklass: Alongwith his helpers silently leave festive treats, chocolate letters and the occasional small gifts in children’s shoes.  They bang on the front door as loudly as they can to assure their arrival, but when the children open the door, he and his helpers are already gone.

Santa Claus:  Keeps presents for children under the Christmas tree usually in their stockings on Christmas Eve.  He will do this secretly.

Sinterklass:  Lives in a warm country. His home life (Spain) and work-life (the Netherlands or Belgium)  are separate. He will be funny with the public and deliver his gifts for two days with his helpers.  He has a better life/work balance and leads a stress-free life.

Santa Claus:  Lives in a freezing cold country.  Manages to do all his deliveries , by himself without any helpers, within just a few hours.

He is probably quite stressed as he struggles to remain unseen in a world of complete surveillance.

The Bonus Fact: In 1625, the Dutch set out to explore the newly discovered continent of America. They established the small colonial village of New Amsterdam there (which would later become known as New York City).

The majority of the original Dutch founders’ traditions were lost over time. However, during the American Revolution, when Americans wished to highlight their non-English heritage, the Dutch tradition of Sinterklaas was revived and enjoyed once more.

Of course, certain things have changed. It’s even been argued that a mistranslation or two led to Sinterklaas’ new name… Santa Claus.